NaNewGaMo: Welcome, and Let’s Get Started!

During the month of NaNewGaMo, we’re going to give you the skills and confidence to become a GM. We’ll guide you through the process of understanding the rules, the setting, and your first adventure.

January is National New Gamemaster Month. We at Monte Cook Games have taken it upon ourselves to declare it so. And to give it the pithy (and perhaps a bit silly) acronym NaNewGaMo. (If you’re familiar with National Novel Writing Month, you’ll recognize the inspiration for that moniker.) Why have a National (international, really) New Gamemaster Month? Well, one thing we love to do at MCG is make gaming easier—our products are always geared around that idea. And one of the hardest things for many gamers (those new to gaming, and those who’ve played for a long time, but never sat behind the proverbial GM screen) is taking the plunge into running an RPG. Becoming the gamemaster. It comes naturally to some folk, but many find the idea every bit as daunting as it is appealing. If that’s you, you’re who NaNewGaMo is for! We want to make it easier for you.

Why Run A Game?

Before we get started, though, a question: Why should you run an RPG? Well, if there is one factor that limits the spread of RPGs, it’s the number of GMs. For most types of games you don’t really need any specialized “equipment,” just the game itself (usually), a handful of players (usually), a place to play, and in some cases a gaming platform of some sort. RPGs are a bit different—they can’t happen unless at least one person in the group steps up to take on a special role. A role that requires more preparation, more effort, more organization, and more tolerance for the spotlight. Without GMs, RPGs can’t happen. As a GM, you’ll be helping the RPG world in general. But the fact that you’re reading this tells me you probably already know a more important reason: It’s an activity we GMs really take joy in. Heck, there’s more to it than joy—it’s practically a need. A creative drive. I think I speak for a lot of GMs when I say that for me, personally, crafting a compelling world, peopling it with interesting characters, laying out engaging conflicts and mysteries, and then revealing these to my players as they work their way through their story (and often being surprised by their contributions along the way) is incredibly fulfilling. I’m a writer, a graphic designer, and a wannabe musician, but nothing scratches the creative itch in quite the unique way that GMing does. You’ve seen that, and you feel its pull—that’s why you’re interested in NaNewGaMo.

So What Are You Getting Into?

Here’s the secret to GMing: It’s easy. Really, it’s easy. Once you’re sitting in the GM’s chair, and you’ve run a session or three, you’ll agree with me. But from where you’re sitting now, it’s no surprise that it seems daunting. There must be some trick to it that’s not obvious, right? And so many pitfalls: What if the other players know the rules better than you? Or the setting? Or would do such a better job that they see right through your pathetic attempts to make the adventure or campaign work? Truthfully, those are just jitters. You’ll need to understand how your rules work, sure, but you don’t have to be the biggest expert, regardless of whether your players are all newbies or are veterans who’ve played the game for years. You don’t have to have every nook and cranny of the setting committed to memory, either—in fact, the setting is yours to craft, and elements you interpret differently than what’s in print (on purpose or by accident) make the setting your own. That’s a feature, not a bug. More important than any of those factors, though, is confidence. You need to feel that you can do it. So that’s what we’re going to give you: skills and confidence. We’ll guide you through the process of understanding the rules, the setting, and your first adventure, so you’ll have the skills to run your first game. And along the way, we’ll give you the confidence that you have everything you need. To top it off, we’ll give you a little kick in the pants at the end, to turn that skill and confidence into an actual, live game session that you’ll run and enjoy. That’s right: By the end of January, you’ll be a real, live, GM. (OK, it might be early February. But you get the picture.)

How Will This Happen?

Here’s our plan of action: You’ll find a new blog post, right here on montecookgames.com, every Monday and Thursday throughout January. With each post, I’ll discuss the next step in your journey and give you a small activity that builds to your first GMing session. (Don’t worry, it’s not homework. This is fun stuff.) As mentioned above, we’ll cover rules, setting, and the adventure itself. But we’ll also talk about the other elements of running a game: Stuff like wrangling players, lining up a time and place, and even laying in snacks. Everything you need to think about to get your game going and ensure it’s a success. We’re going to use Numenera for your first GMing experience, because it’s an easy system for new GMs, it’s a game we know well, and we have a good adventure in mind. We’ll work from a published adventure, too, so we’ll be able to focus this month on the act of GMing rather than the process of designing an adventure. The fundamentals are transferable, though: Once you’ve run your NaNewGaMo adventure, you’ll be a full-fledged GM capable of taking on other systems, building your own worlds, and crafting your own adventures, if you desire, from scratch. All you need to do is join us twice a week, read our posts, and follow through with the activities we recommend. You’ll commit a little time to the process—a few hours a week, tops—but by the end you’ll be ready to run! Who will take you on this journey to becoming a GM? Well, all of MCG will be helping, but I’ll be your main contact. I’m Charles Ryan, and I’m the COO of Monte Cook Games. I played my first RPG way back in 1979, and began GMing shortly thereafter. I’ve run many campaigns (some quite lengthy), hundreds of adventures, and thousands of game sessions. I’ve written quite a few adventures, some for publication and many others just for my own use. I’ve really, really enjoyed every minute of it—and I hope to share that joy with you over the next four weeks!

Your activity for this segment of NaNewGaMo is to get yourself a copy of the Numenera corebook. If you don’t have it already, you can find it in print at your friendly local game store, in PDF format at DriveThruRPG, or in either format at the MCG online store. Spend a little time leafing through the book, getting a feel for the Ninth World. You don’t have to read anything in particular just yet. In fact, I recommend against reading too much, because some new GMs find all that info a bit overwhelming. (Don’t fret: We’ll walk you through the most important stuff over the next few segments.) The Amber Monolith, the fiction at the beginning of the book, is an interesting and atmospheric read if you feel the urge. You’ll also help the NaNewGaMo program, and the community of RPG gamers generally, if you’ll spread the word a bit. Mention NaNewGaMo on social media and down at your game store. We’re going to make it easy for late-comers to join the program, so it’s never too late—but many new GMs will appreciate knowing they’re part of a concerted program, so getting the word out now is better than, say, October. If you’d like to show your participation, feel free to grab this icon for use as a social media avatar. 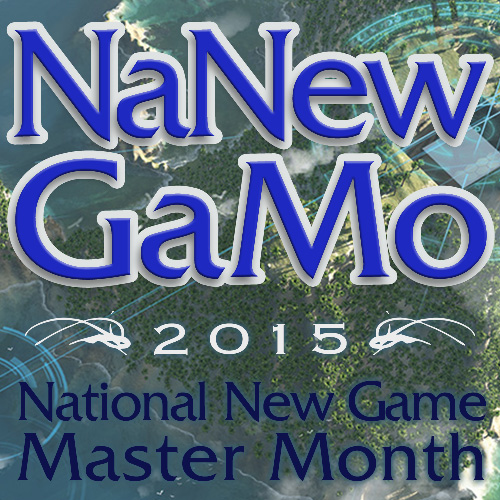 Share NaNewGaMo with people you know! If you’re participating as a new GM, it never hurts to get a few friends involved, so you can compare notes as you go. If you’re an old hand at GMing, help someone else in your group who wants to GM by sharing this and maybe mentoring them a bit through the process. Enjoy, and we’ll talk again on Thursday!